Home » About US » Leadership 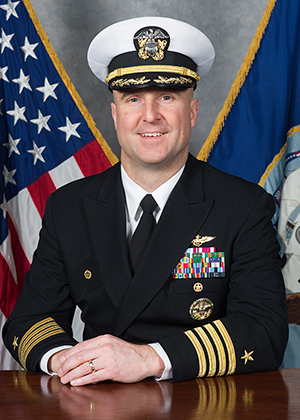 A native of Corvallis, Oregon, Captain Sisson received his commission in 1993 from the University of Colorado Naval Reserve Officer Training Corps, where he earned a Bachelor of Arts in International Affairs.  He was designated a Naval Aviator in 1996.

His shore assignments include instructor pilot at Strike Fighter Squadron 122 (VFA-122); Strike Fighter Placement Officer at the Bureau of Naval Personnel; Operations Research Analyst in Cost Assessment and Program Evaluation (CAPE), working for the Office of the Secretary of Defense; and Battle Director in the Combined Air and Space Operations Center.

He completed Joint Professional Military Education Phase I through the Air Force Command and Staff College correspondence program.  He graduated with distinction from the United States Navy War College, earning a Master of Arts in National Security and Strategic Studies.